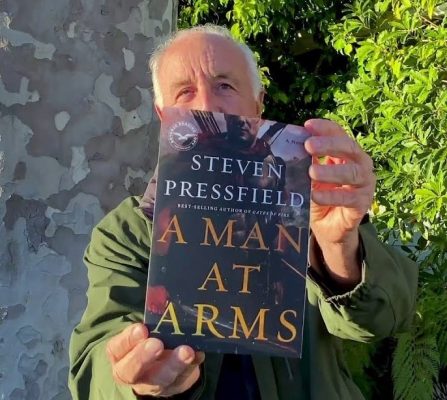 In this episode of the Championship Leadership podcast Steven Pressfield talks about his book: A Man At Arms, his writing career, finding and honing your gift and the importance of investing in yourself.

“Arrogance and ignorance are the entrepreneurs two bestfriends.”

Steven Pressfield is the author of The Legend of Bagger Vance, Gates of Fire, Tides of War, Last of the Amazons, Virtues of War, The Afghan Campaign, Killing Rommel, The Profession, The Lion’s Gate, The War of Art, Turning Pro, Do the Work, The Warrior Ethos, The Authentic Swing, An American Jew, Nobody Wants to Read Your Sh*t, The Knowledge, and The Artist’s Journey.

His debut novel, The Legend of Bagger Vance, was adapted for screen. A film of the same title was released in 2000, directed by Robert Redford and starring Matt Damon, Will Smith and Charlize Theron.

His father was in the Navy, and he was born in Port of Spain, Trinidad, in 1943. Since graduating from Duke University in 1965, he has been a U.S. Marine, an advertising copywriter, schoolteacher, tractor-trailer driver, bartender, oilfield roustabout, attendant in a mental hospital and screenwriter.

His struggles to earn a living as a writer (it took seventeen years to get the first paycheck) are detailed in The War of Art, Turning Pro, The Authentic Swing, Nobody Wants to Read Your Sh*t, and The Knowledge.

There’s a recurring character in his books, named Telamon, a mercenary of ancient days. Telamon doesn’t say much. He rarely gets hurt or wounded. And he never seems to age. His view of the profession of arms is a lot like Pressfield’s conception of art and the artist:

“It is one thing to study war, and another to live the warrior’s life.”

The Game of Numbers