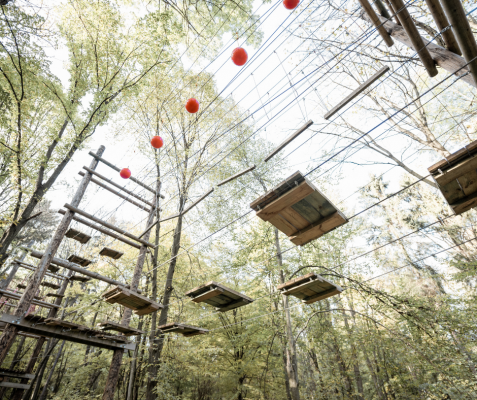 I referenced the patience and lessons I’ve been learning from 11 and 12 years earlier this week.
One of the first things we did was hit the High Ropes Course.

You can talk a big game but when it comes time to show your game, the real ones separate themselves from the pack.

And it’s often the most vocal ones that are all of a sudden the quietest ones when it comes that time.

As we were getting harnessed and equipped to step on the ropes course one of the vocal boys said he couldn’t do it because he was hurt. He had some athletic tape around his ankle.

Clearly, he could have done the course. He was running around chasing leaves just seconds earlier and walked just fine.

He had what was called a quinjury. You know when you blame an “injury” as an excuse to quit. In this case, before we even started.

And that brings us to the ONE LEADERSHIP TIP for today:

First off it always behooves and is most powerful to speak softly and carry a big stick as the late great Teddy Roosevelt once said.

I have no problem with talking a big game as long as it’s backed up with one and even more so when it’s owned in the face of defeat.

Many are watching you and seeing if the two line up. Quiet confidence is powerful and impactful.

Mental fortitude is built on the high ropes course and never will be forged if you don’t even give yourself a chance.

That’s it for today Big Shoots