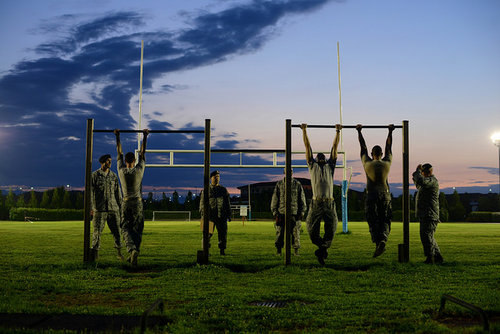 Each and every day you have to make the choice to show up. But that’s just the first step…

When I was in the army and I was an officer, going through officer basic course at Aberdeen Proving Grounds in Maryland in 2003, one of my teachers was a Major in the Army. This officer had gone through Army Ranger school and had earned a Ranger tab. He was an ordinance officer, but he went through Ranger school. For those who don’t know, Army Ranger school is one of the top leadership programs in the country. In fact, that applies to all of the branches of the military. Army Ranger training is extremely difficult, both mentally and physically, but more than that it is all about learning to be a top-notch leader.

Now, the Major had no intention of being an Army Ranger. He wasn’t going to join a Ranger Battalion, but he had gone through the program and had earned that tab. He told our class that before he left the program, another soldier grabbed him by the arm, looked him in the eye, and said, “Don’t just wear the Ranger tab. Bear it.” The Major explained that it took him a while to really understand what that other soldier meant, but he came to understand later that it’s one thing to go through something like Army Ranger school and wear the Ranger tab; it’s another thing to live what it means every day. You see, it can be kind of cool to wear the Ranger tab. When people see that tab, there’s a level of respect that comes along with it. People tend to look up to you because of what you’ve accomplished. Because of what that tab, that symbol, means.

The Major realized this soldier was telling him to not just wear the tab but to never forget what it means to be a Ranger. He wanted the Major to remember to acknowledge what it means to go through Army Ranger school and to own that accomplishment. He was reminding the Major that along with the status and the respect he would receive from others, there is a responsibility that goes along with it.

You have to earn your Trident every day.

When I was at Kokoro, being led by those Navy SEALs, they talked about, “earning your Trident every day.” And of course, the question was asked, “What does it mean to earn your Trident every day?” The answer? It’s not good enough to just get and have that Trident (or Ranger tab), you have to show up and you have to earn it every single day. Earning the Trident or the Ranger tab is just the beginning. It’s not the end. You can’t be satisfied because now you have the tab or the Trident, you also have to uphold the standards. Not only uphold them but continue to push them. It’s also about remembering and honoring the many people who have come before you and lost their lives, or put their lives on the line, or separated themselves from their family. They’ve made huge sacrifices that are not to be taken lightly.

So, now the question becomes, “How can I take this lesson and apply it to my own life?”

Unfortunately, at Kokoro, one of our classmates, one of the remaining nine of the 28 that started, died. He gave his life because he wasn’t gonna quit. He was gonna finish Kokoro. And he did! He survived to the very last second. So, I wondered, how could I honor him in my life? But the answer was clear, I could honor him by choosing to live. I could honor him by not just wearing the “Kokoro tab,” but by bearing it. By choosing to show up and live every single day; the same way that Kurt did when he came to Kokoro.

I’d ask you to take a good look at your own life.

It doesn’t have to be a Ranger tab, or a Trident, or even a Kokoro tab. Whether it’s supporting your family, being a role model to others, leading, or coaching and educating people, don’t just wear that title, but bear it. Each and every day you have to make a choice.

Just because you earn the title, it doesn’t mean that you’re finished. It means that you’re just beginning.

It’s a powerful message, and if you can choose to live your life and to not wear it, but to bear it, to earn your Trident every single day, it’ll be a very powerful and impactful thing. Not only for yourself, but for the others whose lives you touch.

Join Setema Gali, Nate Bailey and the Prosperity Revolution at this year’s PROREV LIVE! Rediscover yourself! Click here to attend.