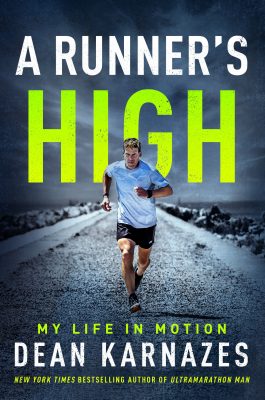 In this episode of the Championship Leadership podcast Nate is with Dean Karnazes. They talk about his new book: A Runner’s High: My Life in Motion, his running career, his relationship with his family as a runner and so much more.

Grab a copy of Dean’s Best Seller “A Runner’s High” here on Amazon. Click the image below!

“You cannot be a runner in isolation.”

“As a writer, you are as good as your next book.”

“I will keep going, take care of my body, and be the best that I can.”

TIME magazine named Dean Karnazes as one of the “Top 100 Most Influential People in the World.” Men’s Fitness hailed him as one of the fittest men on the planet. An internationally recognized endurance athlete and NY Times bestselling author, Dean has pushed his body and mind to inconceivable limits. Among his many accomplishments, he has run 350 continuous miles, foregoing sleep for three nights. He’s run across Death Valley in 120 degree temperatures, and he’s run a marathon to the South Pole in negative 40 degrees. On ten different occasions, he’s run a 200-mile relay race solo, racing alongside teams of twelve.

His most recent endeavor was running 50 marathons, in all 50 US states, in 50 consecutive days, finishing with the NYC Marathon, which he ran in three hours flat.

Dean and his incredible adventures have been featured on 60 Minutes, The Late Show with David Letterman, CBS News, CNN, ESPN, The Howard Stern Show, NPR’s Morning Edition, the BBC, and many others. He has appeared on the cover of Runner’s World and Outside, and been featured in TIME, Newsweek, People, GQ, The New York Times, USA TODAY, The Washington Post, Men’s Journal, Forbes, The Chicago Tribune, The Los Angeles Times, and the London Telegraph, to mention a few. He is a monthly columnist for Men’s Health, the largest Men’s publication in the world.

Beyond being a celebrated endurance athlete, philanthropist, and bestselling author, Dean is an accomplished businessman with a notable professional career working for several Fortune 500 companies and startups alike. A graduate of USF’s McLaren School of Business & Management, with additional graduate-level coursework at Stanford University, he is uniquely able to demonstrate how the lessons learned from athletics can be applied to business, and he is able to convey, with authenticity, the many insights he has gleaned along the way as an athlete and business professional.

A Runner’s High: My Life in Motion

Run!: 26.2 Stories of Blisters and Bliss